Ask any motorcyclist what they think the coolest motorcycle trick is and you’ll probably get “a wheelie!” as an answer. Besides stealing the show, mastering the wheelie technique can help when your front wheel suddenly lifts during a fast acceleration or to overcome an obstacle during an off-road ride.

For a long time I’ve wanted to learn how to wheelie so I booked a wheelie training at Jeremy Vonk’s Stunt and Wheelie School. 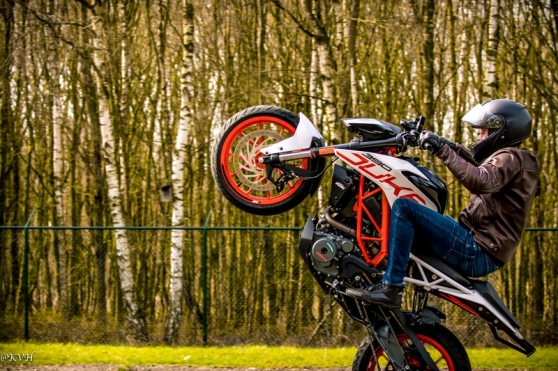 The Stunt and Wheelie School opened last summer and was a great success from the start. The reason for this is that it offers a package that cannot be found elsewhere in the Benelux region: there’s a well-known stunt rider as a teacher, there are rental bikes so you don’t need to abuse your own bike, and there’s a Wheelie Safety Device which prevents you from falling on your back.

Upon arrival, two KTM’s 390 Duke are neatly parked next to each other on the strip of the Enschede airport. The safety device draws our attention: some kind of frame on three wheels that’s mounted behind the motorcycle. This ensures that the bike cannot fall sideways nor can you pull a wheelie too far backwards, avoiding a landing on your rear. Feels safe.

We start off with the correct sitting position: towards the back of the seat, two fingers on the clutch, one finger on the brake, knees tightly against the tank, ankles pressed against the bike and above all: keep your foot on the rear brake. These instructions are constantly repeated throughout the day. After turning off the traction control we immediately start with the first exercises.

Wybe, fellow instructor of Jeremy, demonstrates: first you ride straight on two wheels, then you accelerate decidedly and slow down by only using the rear brake without locking the rear wheel. Sounds simple, doesn’t it? But because of the safety frame, the bike doesn’t steer like a bike. It’s more like riding a quad, a feeling not everybody’s used to.

The next exercise consists of an acceleration to more or less 7000 rpm and then reducing the speed with the rear brake without throttling down. A good exercise to get a better feeling of the rear brake. 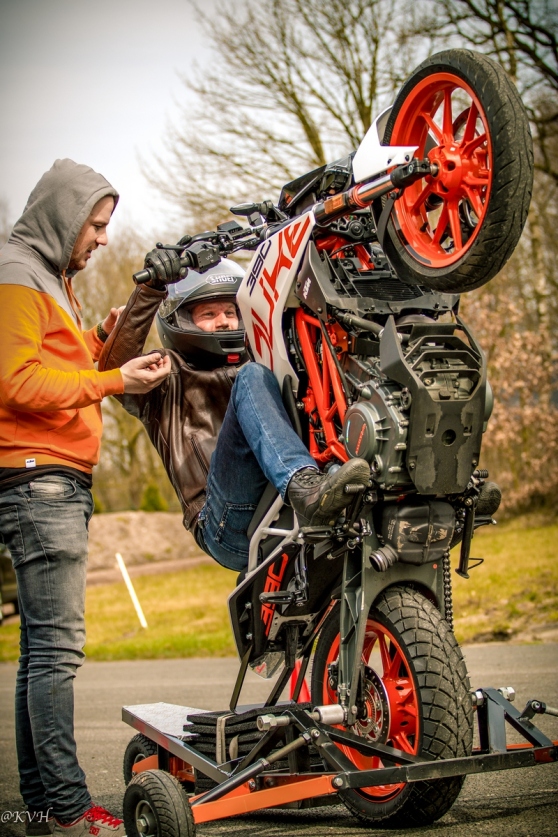 Next up: the actual wheelie! Jeremy and Wybe first put everyone on the rear wheel, using the frame as a support for the bike. This is steeper than expected! We clamp our knees against the tank so we don’t slide down, we (try to) relax our arms and keep them reasonably straight.

Then it’s up to us. Accelerating from a standstill and then suddenly releasing the clutch. The first time the bike stalls, but the second time I unexpectedly find myself and the bike in a very vertical position. My surprised reaction makes me close the throttle and hit the rear brake. The bike’s front hits the ground hard and my family jewels hit the tank hard too. Wybe smiles. “Forgot to clamp your knees?”

The rest of the day we practice doing wheelies with Jeremy and Wybe constantly adjusting our technique and giving tips. Both have their own style. Wybe is very calm and encouraging while Jeremy has a more exuberant feedback style using funny comparisons to make it clear to you what you should do. They’re perfectly complementary.

When I find myself having trouble keeping a constant throttle during the wheelie, Jeremy takes me along as a passenger for a quick demo. It’s hard to believe how smooth his technique is and how little he plays with the throttle. Finally I manage to control a wheelie more or less, over the entire length of the training strip.

To conclude the training, Jeremy shows some tricks on his KTM 1290 Super Duke R. First he does a couple of slow wheelies, after which the speed and difficulty go up. The powerslides are great to see but his stoppies are the most impressive. 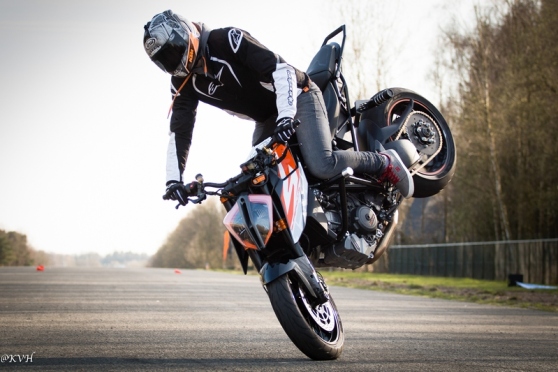 The Stunt and Wheelie School is located in the Netherlands, at the airport of Enschede. On Wednesdays and Saturdays, groups of up to four people can book four hours of training on two motorbikes, so you’ll have to alternate. Despite a hefty price tag (we paid 250 euro per person, but in the meantime the price’s gone up to 275 euro) I found three wheelie wannabees who wanted to go with me in no time.

Jeremy Vonk is an official KTM stunt rider and a cheerful pal. From the welcome to the last wheelie, he puts a smile on your face with his jokes. Wybe is the cool guy but at the same time he’s very enthusiastic and supporting every time you succeed in an exercise. We had a wonderful day.

🚨🚨 New review alert 🚨🚨
English version of our trip through Andalusia is now live too!
Finished a little write-up about the trip to Andalusia with @clubmot.be
⛰️♥️
El Torcal de Antequera 😍
Rain in Spain
Loading Comments...