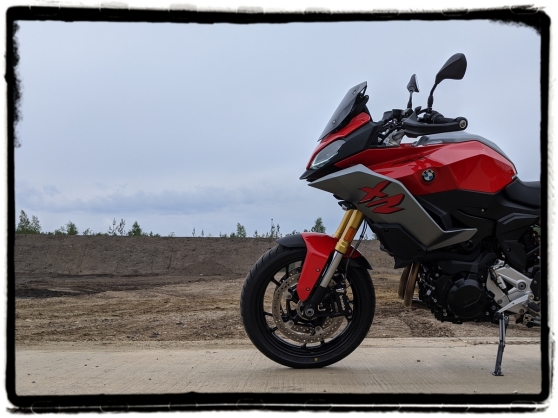 When BMW announced the brand-new F 900 XR at the end of last year – at the same time as the updated S 1000 XR – several questions immediately popped up for me. Will the 900 be an adrenaline bomb like the 1000? Or will it be a kind of entry-level variant? Or a watered-down version?

The previous S 1000 XR was my favourite test motorcycle of the year in 2015. I loved that combination of performance and comfort. I have not tried the new 1000 yet and it is still at the top of my test wish list, but I did get the opportunity to try out the 900 in the meantime.

The original plan was to take it on a road trip to the Alps, but corona forced us to change our plans. We stayed home and toured around Belgium for a week, with little outings to the Eifel and northern France. Not always, but often with luggage on the back. We clocked some 2,500 km; that should suffice for an informed opinion.

Visually, the BMW F 900 XR has a lot in common with its big brother. The close family ties are clearly recognisable, so much so that the untrained eye might even mistake them for two identical bikes. The biggest give-away is possibly the rear end, which is cut off kind of clumsily right behind the seat. On the 1000 XR, the rear end has a more solid look, which is more pleasing to the eye. My test motorcycle, however, was equipped with a luggage rack, which turned out to be END_OF_DOCUMENT_TOKEN_TO_BE_REPLACED