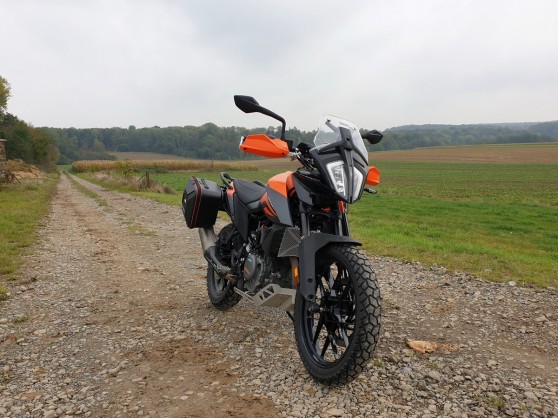 For years, KTM has been building the most offroad-worthy bikes. They make use of the knowledge they’ve gained in the rally world to build a production bike with – just like any brand nowadays – the pieces they have in stock.

This way they’ve constructed a full 1290 line-up: from The Beast all the way up to the Super Adventure. The engine of the 790 Duke was the base for one of the most praised adventure bikes of recent years, the KTM 790 Adventure. Recently they repeated the trick with the 890 Duke.

Downsizing is a popular trend in the motorcycling world as well, because not everyone can afford an expensive motorcycle. Especially European constructors want to get a piece of the cake that we know as ‘growth markets’. When you’re present in one of those BRIC-countries, you’ll want to have the bike built over there to reduce costs. So KTM took the engine and the frame of the Duke 390 platform to India where the Bajaj factories gave birth to the KTM 390 Adventure.

For the last test ride of this year, I went out for a ride on this smallest adventurer from Mattighofen. During a staycation I travelled from the Ardennes to the coast, wondering how much of an adventure one could experience on this Indian Austrian. After all it’s “but a four hundred”.

I’m pretty confused when I stand next to it for the first time: is this the 390 or the 790? The 390 isn’t at all as small as I expected. The standard seat height measures 855 mm, half a centimeter higher than the 790 Adventure. The bodywork looks just as END_OF_DOCUMENT_TOKEN_TO_BE_REPLACED

Three years ago Husqvarna presented the prototype of the Vitpilen 701 at EICMA. We had to wait a long time for the final production model. Beginning of this year, at the Brussels Motor Show, it was love at first sight. Now, finally I had the chance to test if this Husky rides as good as it looks. 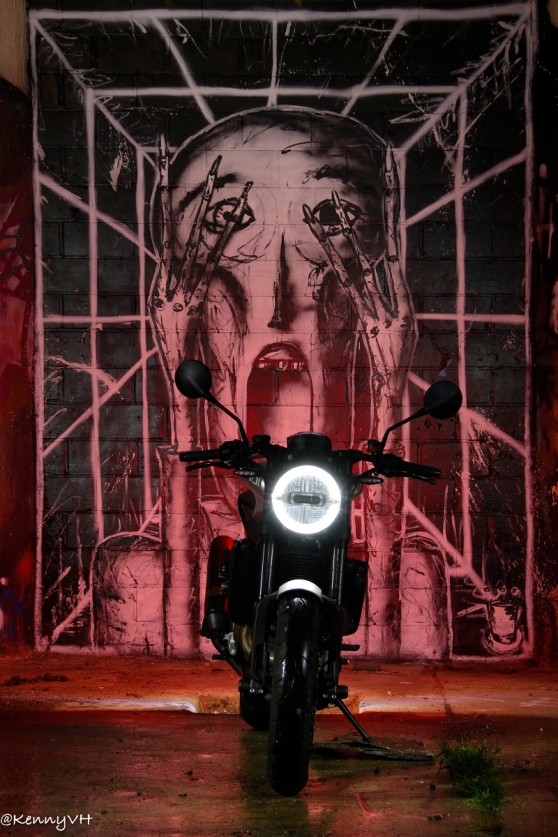 There’s no accounting for taste, but still: the Vitpilen is a stunner. Design-wise, it deviates very little from the concept model and usually that’s a good thing.

“Simple. Progressive.” That’s the motto Husqvarna uses for the Vitpilen line. This can be seen in the design of both the 701 and the 401: progressive. And unique in the motorcycle business. Just have a look at the odd shape of the tank. Or at “the split”, the yellow line cutting the bike in two. The LED lights, both front and rear, are true design wonders and stylish logos are strewn around without ever being too much.

It’s a shame they threw a GS style license plate fender on it. And how cool would it have been should they’ve kept the open air filter as seen on the concept model?

After all this drooling, it’s time to ride! No explanations beforehand needed because there are only three buttons on the small round dash. These allow you to adjust some menu settings and switch off the traction control or ABS. That’s it. Simple.

With a seat height of 830mm the bike is rather high. The saddle also has END_OF_DOCUMENT_TOKEN_TO_BE_REPLACED

One year ago I bought my first motorcycle. Without much experience you aren’t sure you’re making the right choice of course. So here we are, with 20,000 km more on the odometer. Time to evaluate my BMW F 650 GS.

The short story: I’m very pleased with my bike. It’s an excellent learning machine, both for first-time bikers as for first-time off-road riders. It can handle about anything and has proven very reliable.

You prefer the longer story? Here you go:

It wasn’t love at first sight and I still think the BMW F 650 GS isn’t a dazzling beauty. Luckily looks aren’t critical to me.

During my search for a first motorcycle, the 650 GS was praised regularly as the ideal bike for beginners. Which isn’t a lie. It’s perfect to learn maneuvering. It’s not too heavy, not too aggressive and gives confidence quickly.

The 650 GS is also a good learning bike for those who want to pick up off-road riding with an allroad bike. It has enough power and its weight (176 kg dry weight) is easier to handle than for example a 1150 GSA that weighs 60 kg more. It’s also robust enough although the plastic parts get damaged pretty easily.

I knew I was going to do lots of highway commuting and lanesplitting with my bike. So a good sitting position was pretty essential. On the 650 GS you sit upright and the seat offers plenty of space to move around so your back won’t hurt quickly.

The knees are fairly bent but it doesn’t get annoying or painful. Just a question of getting used to.

On daily commutes some protection against wind and rain comes in handy. The 650 GS hasn’t much to offer to be honest. The wind screen is tiny and there’s hardly any fairing. For instance an RT would be a better choice but it can still get worse. Like the Iron 883 for example, which really is a good weather only bike.

After a few months with my 650 GS I began to feel the need for some accessories. Such as panniers. Would be more comfortable than riding with a backpack every day. Happy I found a set of secondhand BMW Vario panniers.

The windscreen offers very limited protection. I’ve been thinking about getting a bigger one but in the end I decided it’ll have to do.

I also thought about extra lights. Especially for being more visible in winter. But (falling a lot when) off-road riding would probable ruin the lights during the first ride. So no fog lights.

The mirrors have a quite large blind spot. But again, it’s something you get used to. So I didn’t get other mirrors. And you can always get worse (yes, the Harley again).

The BMW F 650 GS has a chain drive so you need to grease it regularly. Takes about 2 minutes. That’s all you need to do. The rest can be done during the inspections at the dealership, like an oil change or replacing wearing parts such as brake pads and the chain set.

The 650 GS certainly isn’t a racer but with its single cylinder, 652 cc and 50 hp, it’s remarkably snappy. Its powerband is spread out nicely and it doesn’t feel short of breath in high revs.

At 120 km/h it does 5,000 rpm which is pretty high. Lower would feel more comfortable but in the end it’s something you get used too.

My colleague Nicolas, who owns a Triumph Street Triple, was sure that I would change my 650 GS for a more powerful bike within a year. I’ve proven him wrong.

The 650 GS perfectly meets my needs, mainly because I’m still a learner, especially off-road. A heavier bike would only make things more difficult, so I don’t see why I would get rid of my little GS any time soon.

It also copes well with my daily commutes. In fifth gear on the highway you feel you’re nearing its peak, but if you stick to the traffic rules you’ll never reach those limits.