In 2016 I tested the Africa Twin and I wasn’t exactly wild about it. Three years later I have to revise my opinion. But first, let’s look at the bigger picture.

In the late 1980s the Honda XRV650 started the Africa Twin story. The discontinuation of the XRV750 production in 2003 interrupted that story, but Honda breathed new life into the Africa Twin: in 2016 the CRF1000L saw the light of day, after a few years of rumors and speculation.

That update made the Africa Twin 2 kg lighter. It got a ride-by-wire throttle and a new, more extensive LCD display. The engine gained mid-range torque thanks to a lighter balance shaft and a revised inlet and exhaust system. The DCT (automatic gearbox in normal human language) also got an update.

Even more than the Africa Twin, the Adventure Sports is built for long, adventurous journeys. It has a larger tank (24.2 liters compared to 18.8 on the Africa Twin), a higher windshield, a taller fairing, tough-looking crash bars, slightly higher positioned handlebars and 2 cm more ground clearance than the Africa Twin. The adjustable seat can be set at 900 or 920 mm (on the Africa Twin: 850 or 870 mm). There’s also a lower seat available (60 mm lower).

I spent a few days with the Africa Twin Adventure Sports in Germany’s Black Forest to find out if Honda’s big adventure bike really improved. I hoped to get one with a manual gearbox, because in 2016 my first experience with Honda’s DCT absolutely hadn’t convinced me. So I was slightly disappointed when I discovered that the Adventure Sports I got to test was one with automatic transmission. 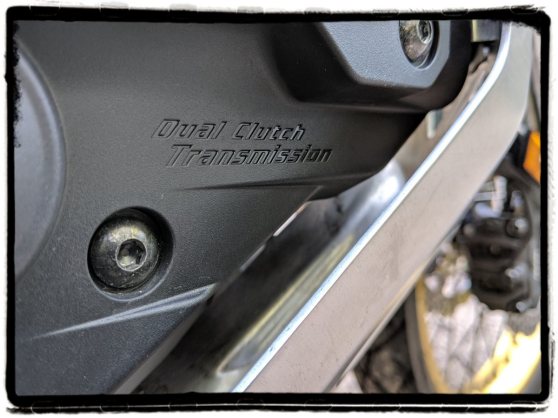 I knew that I had to skip the D-mode of the gearbox (due to its sleep-inducing slow shift pattern) and immediately chose the S3 mode, the most extreme of the three sportive shift modes. Very quickly my initial disappointment made way for surprise. It turned out that the DCT indeed was improved.

I really could feel the difference. The new gearbox is a lot more intuitive and direct. No more down-shifting the moment you open the throttle in the corner, the DCT now shifts down if you decelerate before the corner. In the S3 mode, this happens earliest, which is closest to my gear-shifting style.

Shifting up sometimes takes a bit long in the S3 mode. You’ll be high-revving without having much hp’s available. Fortunately, you can easily intervene with the manual gear-shift flippers on the left-hand side of the handlebars. 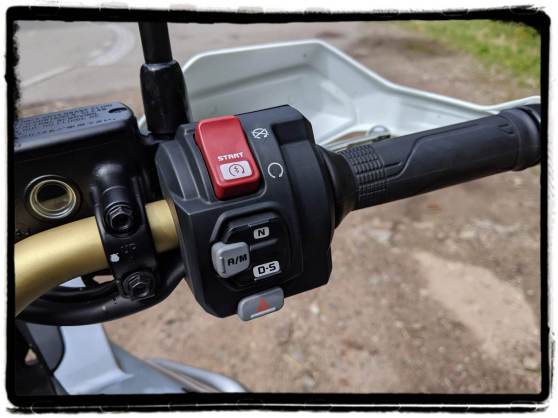 In 2016 I did about 600 km with the Africa Twin, which I didn’t find enough to get used to the DCT. This time I didn’t even need 300 km to feel familiar with the automatic gearbox. That has everything to do with the improvements. No, it still doesn’t feel like a manual, but Honda’s renewed DCT approaches the manual feeling a lot more. Instead of being annoyed by the sometimes-stupid shifting style like three years ago, I now began to enjoy the ease of use. And yes, I still intervened regularly. In sportier cornering for example, I often shifted down manually before the corner, although the S3 would’ve eventually done that for me, even before entering the corner. However, I wanted to take advantage of the engine brake which worked better with well-timed down-shifting.

It was also nice to notice that the DCT is smart enough to correct some of my mistakes. For example if I pressed the plus-flipper but actually meant the minus-flipper (to slow down for a corner).

The Africa Twin still isn’t a power bike but the 94 hp is more than sufficient for common use and – unlike three years ago, when I found that the Africa Twin lacked some spice – the Adventure Sports now seemed a lot more energetic. The reinforced torque in the mid-range, combined with a more alert DCT, makes a big difference.

The Adventure Sports also reacted more nervously to sporty cornering than the Africa Twin. I had to correct regularly, on rough surfaces the rear got nervous and on bumpy asphalt it became bouncy. So the bike’s stability wasn’t always great. Is the longer spring travel to blame? You can fully adjust the suspension of the Adventure Sports, so you can try to improve things. Which I didn’t. I’m of the “riding instead of fiddling” type and on perfect asphalt there wasn’t much to complain about.

The Africa Twin has four riding modes (Tour, Urban, Gravel and User) which control power, engine brake and traction control. You can set power and engine brake on three levels, traction control has seven levels and can be turned off completely in all modes. The adjustable engine brake proved very useful during a few intense cornering days. At maximum, I had to touch the brake lever much less before entering a corner.

The ABS can be switched off in all modes but only on the rear. There’s also the G-button for off-road use. I didn’t venture unpaved, firstly because of the tire choice (Dunlop Trailmax), and secondly: legal off-road in Germany? Hard to find.

Nonetheless I did try the standing position on the foot pegs regularly, just to catch some wind when the temperatures reached a blistering 40 °C. You stand up comfortably with the handlebars well within reach and the knees clamping the tank naturally.

The high windshield is perhaps a bit too much for tough off-roading (as in: watch out not to slam your face against it). On top of that, the Adventure Sports’ noticeably higher center of gravity only complicates matters off-road. Also less interesting: the first gas impulse from a closed throttle is too brutal in all riding modes. Tight hairpins and slow maneuvers at the campsite sometimes led to ticklish situations. So I think the regular Africa Twin is the better choice for those who plan a lot of off-road.

Off to the horizon?

The bike offers a good protection against wind and weather. That’s the advantage of the tall fairing and the big windshield. The top of my helmet was buffeting a bit when riding on the motorway, but of course a lot depends on your height and type of helmet. I wore an adventure helmet.

Honda claims the Adventure Sports can do 525 km on a full tank (24.2 liters at a consumption of 4.6 l/100 km) and that number turned out to be not far off. During my three days in the Black Forest, I clocked an average of 4.7 liters, while during the ride home on the Deutsche Autobahn the Honda consumed an average of 4.9 liters. Be aware that you’ll have to ignore the fuel light for quite some distance in order to achieve those 500 km.

Yet I didn’t find the Adventure Sports an ideal bike to ride 500 km in one go. Firstly because of the seat. It’s spacious so that you have a lot of choice to find a comfy spot, but it’s also very firm and seat pain was inevitable, so switching spots was crucial.

A second misstep: no cruise control. Not even on the option list. Would have been handy, because when covering long distances I felt slight vibrations in the right half of the handlebars. Not particularly annoying, but also hard to ignore. Luckily, the heated grips are part of the standard equipment.

The panniers – which are optional – aren’t perfect either. I prefer panniers which open with a top lid instead of from the side. These were difficult to close, even if they weren’t fully packed, and on top of that I’ve been struggling for five minutes to hang the right pannier on the bike. I’m not the handiest guy in the world, but still … What’s more, there’s a sticker in the panniers: 130 km/h speed limit. That’s a bit slow on the Autobahn, no?

The new display isn’t really a misstep but rather a missed opportunity. There’s no lack of information but the design is outdated and the readability could be better. 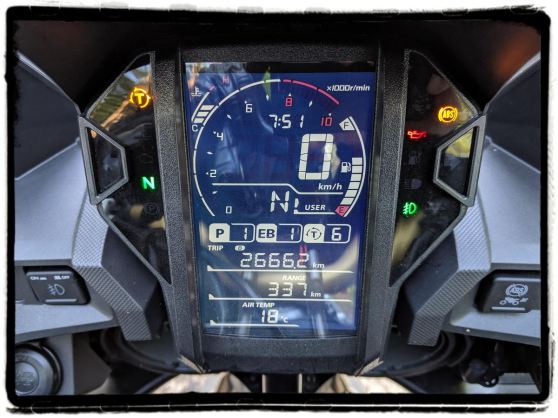 Fortunately, it seems that the teething problems affecting the first generation CRF1000L Africa Twin DCT have been largely cured. No button got stuck, no parts showed early wear and the engine, DCT and sound improved. You can’t say the Honda guys took a break. 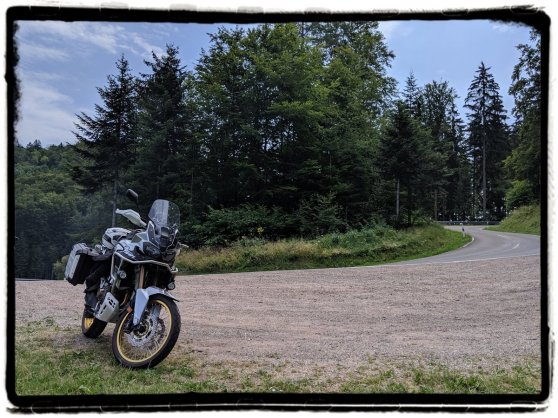 To begin with, the Honda CRF1000L Africa Twin Adventure Sports is a very long name for a motorcycle. This tough brother of the Africa Twin is equipped for long, adventurous journeys, and therefore you enjoy better wind protection and a larger tank. It’s a pity the seat is uncomfortable and a cruise control is absent.

The Adventure Sports’s improved DCT is noticeably more intuitive. The two-cylinder engine was also modified, and that difference neither goes unnoticed. Two important achievements of this second generation CRF1000L.

However, I would dare to say that the “regular” Africa Twin is a better cornering machine than the Adventure Sports, mainly because it felt lighter and more agile, especially when things got difficult. But if you want to cover big distances, you might want to ignore that and enjoy the (mostly) comfy travel bike the Adventure Sports DCT is.