A while ago one of my friends did an adventure trip to the Ardennes with his brand new Husqvarna 701 Enduro. While we were cursing and sweating on our heavy adventure bikes, the Husky followed, fingers in the nose. So when I was planning a new adventure trip, to the Morvan region in France this time, I took the opportunity to test the 701 Enduro and see for myself if it’s really such an easy bike to ride off-road.

The Husqvarna name may not mean much to the average biker. But motocross pilots and fans know better. The Swedish brand has a rich enduro and motocross history. In the sixties and seventies, it won one world title after another. But in the late 80’s it got in trouble. After Cagiva, MV Agusta and BMW ownership, Stefan Pierer took the brand under his wings. Yes, that’s the Austrian guy who’s also heavily involved in KTM. So it’s almost pure logic that the current Husqvarna motorcycles have some KTM blood flowing through their veins.

The single cylinder engine of the 701 Enduro delivers 74 hp and 71 Nm at 6,750 rpm, so a KTM 1190 Adventure or a BMW R 1200 GS is completely out of the 701’s league. But if you push it hard enough that slightly crazy KTM character instantly awakens. Open the throttle recklessly in second gear and the front wheel will go airborn guaranteed. The engine runs quite rough in low rpm’s, something I also experienced with the KTM 1050 Adventure and the 1290 Super Duke GT, which also shows the close KTM tie. 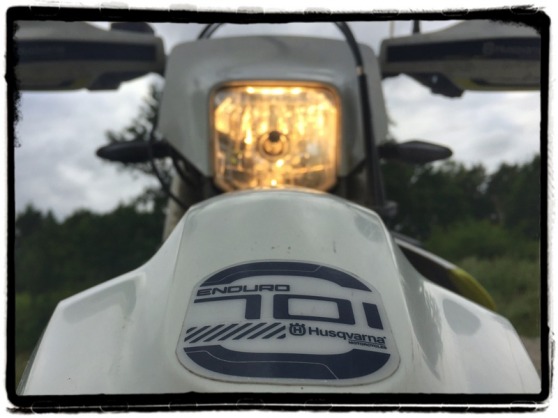 Because of the cross-fertilization between the two brands you might think that the Husqvarna 701 Enduro is just a KTM 690 Enduro in disguise. Don’t be fooled. The engine comes from the brand new KTM 690 Duke, and on other levels too you should rather see the Husky as an upgraded KTM 690 Enduro. For example, the WP suspension is better and longer. 275 mm of travel means that bumpy tracks can be tackled easier. The suspension’s standard setting was completely to my liking but if you want you can adjust both the front and rear suspension.

On the highway the Husky easily reaches 120 km/h without losing stability. It can go faster but the wind will become an issue at that point. I heard some complaints about the seat being too firm. Yes, it’s firm. But I’ve already tested 100% road bikes with less comfortable seats. A 1,5 hour ride with the 701 wasn’t torturing. One thing was a torture: cleaning the seat after a few days of off-roading. An almost impossible task, especially the white and yellow parts.

If you want to go off-roading somewhere a long way from home, then you could do the complete trip with the 701. But keep in mind: little comfort and zero wind protection. You better have some character if you plan long stretches of highway.

Obviously more fun can be found once you leave the highway. The Husky needs some encouragement to enter corners, so you’ll tend to handle the bike more aggressively. It doesn’t mind that. Acting like a hooligan is its favourite pastime. Leaving corners swiftly, fully attacking the next corner, that’s the way (a-ha a-ha) I like it (a-ha a-ha). And the bike too. 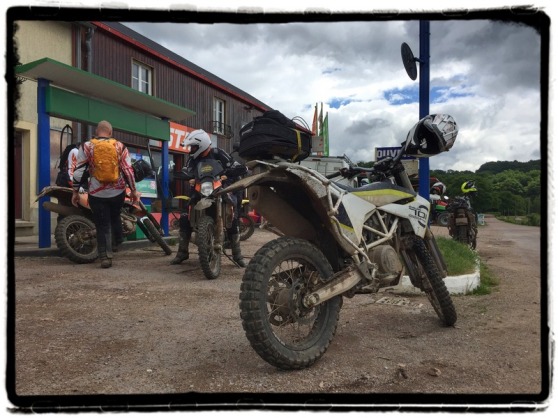 On off-road tracks the contrast with a heavy adventure bike is quite spectacular. My 800 GS weighs more than 200 kg, the 701 Enduro 160 kg with a full tank. Forty kilos that make a big difference. If your 1200 GS buddies call you a cheater when you show up for an adventure trip on a 701 Enduro, well, they have a point. But you’ll gladly hear them whine because every technical part you’ll be able to playfully change tracks, keep your balance easier and ride more relaxed then the GS boys. And you can correct a misstep smoothly, while with a 1200 GS that misstep might lead to you hitting the surface.

The standing position is good. Straight up on the pegs, your legs fit nicely around the bike so you can steer with your knees effortlessly. However, I would prefer to stand a bit less bent forward, but that’s easily solved with a set of risers.

Still you can’t call the 701 Enduro the perfect off-road bike. Mainly because of the throttle response which is – despite being ride-by-wire – pretty brutal. In combination with the rapidly peaking torque, challenging tracks might cause painful situations, as I have experienced myself.

While the 2016 Husky offered mappings (standard, sport and rain) – probably a solution for the harsh throttle response – as from MY2017 the mappings are gone. Possibly caused by the new generation LC4-engine with a different ECU.

The hydraulic Maguro clutch is quite excellent (and standard!). It’s light, sensitive and adjustable. Perfect for off-road use. The same goes for the Brembo brake lever. ABS is disengageable of course. The option list offers a dongle that allows you to disengage the ABS on the rear wheel only.

Speaking of the brakes: the front brake is merely enough when riding on-road. The single disc lacks a bit of force. And the rear brake blocks very easily off-road.

During the Morvan adventure trip I fell three times, of which two times painfully hard. Damage couldn’t be avoided. A body panel needed to be replaced to make the 701 look decent again. Besides that the standard handguards weren’t very protective, but apart from some scratches they survived. I highly recommend replacing the standard handguards by ones that have stronger and more protective aluminium handlebars. The skidplate also offers minimal protection.

Very annoying: the side stand is very long, often making a hassle of parking the bike. The fuel cap on the rear isn’t very practical either. Without luggage there isn’t an issue, but fuelling up a loaded 701 is a different story. Luckily Husqvarna offers a tailbag with a very useful quicklock system, so you can easily reach the fuel cap.

The tiny display barely contains info: speed, time and two trip counters. At standstill you also get the odometer, average speed and ART (number of operating hours). No gear indicator, no tachometer. Which isn’t a disaster really. Because off-road you’ll only want to keep an eye on the track.

The Husqvarna 701 Enduro is a do-it-all bike. It can handle off-road easily and really stands out if you ride with a group of big adventure bikes. Whether it can follow a group of enduro’s depends on the rider’s skills. The steering behaviour, stability and maneuverability are fantastic. If you switch your adventure bike for this dual sport bike you’ll notice how forgiving and easy it is, mainly off-road of course. Maybe you’ll want risers, better handguards and a larger skidplate but the basics of the bike are good. You won’t have to avoid the paved roads, because the highway is the only place were the 701 isn’t much fun.